To book a session with Meenakshi Gulati click here to her profile.

By this time the client has visited a past life. Post death the soul is moving up into the clouds…

M: Let’s follow your soul to see where it is your soul goes from here. Describe everything that you sense and feel and see. Keep going and describe what you see.

M: You see a planet?

M: Do you recognize this planet?

M: Do you feel you want to go towards this planet? What do you feel? What do you sense as a soul? Where do you have to go from here?

C: I feel like I have to go back on that planet a little bit. I see craters. It’s like dark gray- brown, but I see the planet now.

M: Describe what you see once you’re there.

C: Uh! I just sense that it’s cold. Don’t know what I’d be doing on that planet! Think I have to work there for a little bit.

M: What kind of work do you have to do?

M: Let’s go along and see what it is that you do here on this planet, since you said that you feel you need to visit it and work there. You’re there. Now what do you see? What do you sense?

C: I feel like I have to work on this planet. It’s like a factory of some sort. They’re putting things together. It looks like an assembly line.

M: Is everyone wearing it?

M: Are you wearing it too?

C: I guess I’m wearing it too. (to disguise) What it looks like, it’s form fitting and it goes up to your neck. It’s very plain. We wear boots, black boots with laces. Looks like… (trying to describe)

M: Are you wearing the black suit too or are you in spirit? Do you have a body here?

M: This factory, what is it doing? What are these people working on?

C: Feel like they’re packaging something, putting things together.

C: I feel like it’s a factory but it’s nothing for good. It’s for bad. (starts to get nervous with the energies there)

M: You can sense everything and know everything very clearly. You can see exactly what they’re packaging in this factory and what they do. Describe what you see. You’re invisible and you’re there now.

C: Yeah, okay. So I feel like it’s something for stuff that they’re putting in…  to put into our bodies. It’s not good.

M: It’s stuff that they would put into whose bodies?

M: Describe the factory and exactly how it works. What are they doing?

C: (Gets very uncomfortable) I get that they look evil. Like, Greys. I keep getting Greys?

C: They’re putting these together.

M: How are they going to put these into the humans?

C: They put these into, like the vaccines, I think?

M: What do you do next? What happens next?

C: I’m just watching. And I just see they’re packing these all up.

M: Once they’re packed, you said they put technology into… did you say files or vials?

C: It’s like, I can see them there. But humans can’t see them. There’s just like, it’s like all these little, tiny-tiny technologies. Not just one one big technology that you put in. But these are like, hundreds of these little vials that we can just see. And so they’re inserted. It’s like a shot. It just flows and you could just see them all flow. Just like… something like shooting out and they just go fast. They get dispersed.

C: They’re in the vaccine bottles, which shoot into the people. So these hundreds of little technologies, they get shot in them, fast. It just propels and it goes, spreads all through the bloodstreams.

C: So those technologies, they get put into these little vials there and then here, they get put in with the liquid or they’re merged in. You can’t see it as it doesn’t look different with the human eye but you can see it’s all merged together with that liquid. So those hundreds (negative technologies) are still intact. And then when it shoots, it blends. When it shoots in, that’s how those nanotechnologies – they spread.

M: And these people that are working; the scientists, the laboratory workers and the researchers, are they aware of this nanotechnology? Negative nano technology?

C: The doctors don’t know, but not all the researchers are aware either. Just a select few. There’s some people who are not told explicitly, but they know. And they don’t say anything, but they’re just not going to get the vaccines.

M: They’re not going to get the vaccines themselves, these people that know?!

M: These black uniform beings that you saw are they related to these people (on Earth) that know about the negative technology in vaccines?

M: The ones dressed in the black uniforms do they have eyes? Can you see their eyes and their souls? Do they have souls?

C: So dark. They’re dark. They are so dark. I don’t know why they would do this.

M: Who physically gives this nanotechnology to the scientists that are aware of it? You’re there now you can see and sense very clearly.

C: I feel like it’s a small, small group of people. I don’t know who they are.

M: Are they the same race as the one that you saw with darkness in their soul, and you couldn’t see the soul?

C: I feel like, it’s not the same race, they do have more light than the other black suit beings. But they’re still very dark.

M: So once this vaccine is injected into people, just take a look and see what exactly happens when this vaccine goes into the bloodstream.

C: It poisons the whole blood stream. They can be tracked wherever they go. These people will know all the time what they’re doing.

M: What is it supposed to do, this nanotechnology that they’ve put in? What is the purpose of it? What does it do to the human body, mind and soul? As you can see very clearly.

C: I feel like it takes over. It’s similar to even just the technology that you wear on your hands where it tracks your heart rate and your sleeping habits. It feels like it’s the same type of technology but it runs through the bloodstream. It’s not good. These technologies can control everything.

M: What does it do to the brain of the person?

M: In what sense does it take over?

C: Takes over their good and free will. They’re  unable to make good/better choices.

C: Yes, for their highest good. Because it would benefit others, it’ll benefit those individuals that are controlling them that those whose soul it is.

M: Is there anything else you want to share about this?

M: Do they do this to all the vaccines or a select few?

C: I’m getting that this is how it’s always been with vaccines. This is how it’s been packaged that way in terms of the technologies. But, this one – this one is bad! Because this one takes over.

M: This one that you’re seeing right now is it related to any particular disorder or disease?

C: Feels like it’s the one that’s for the COVID. I don’t know why I know this. But I know this now, that’s what I’m getting.

M: Thank you for sharing. What does it do to the DNA of the person, the organic DNA?

C: Feels Like it changes it. It changes it to how the people who want to control want it to be.

M: Thank you for sharing.

(Higher Self called in)

M: Greetings, welcome. I thank you, love you, honor you and respect you. Thank you for being here today and for taking us through this experience. May I ask you questions now?

M: You took her to the gray planet. Why is it that her soul got pulled to that gray planet?

Higher Self: To teach her to educate people. She researches so much about the vaccines. She wants to keep herself safe and everyone else safe. Her family is taking it. Her brother is taking the vaccine. He has taken one dose. And to tell people, she did not want to talk about this. She was fighting it.

M:  Now that you have shown her what exactly is going into this particular vaccine for the Covid (And also you said it goes into other vaccines as well but this one is more lethal than others.) Do you think this is something that she should be educating people of?

M:  Is she scared of being judged?

M: What do you say about that?

Higher Self: Scared of what people might say and the backlash but she needs to speak her truth.

M: Yes. Is there anything else Higher Self that you want to mention apart from the experience you showed her?

Higher Self: You’re so strong. That’s it!

End of excerpt of session.

For legal purposes: All that is mentioned through this article, we not a licensed physician, please see your Doctor for health concerns. 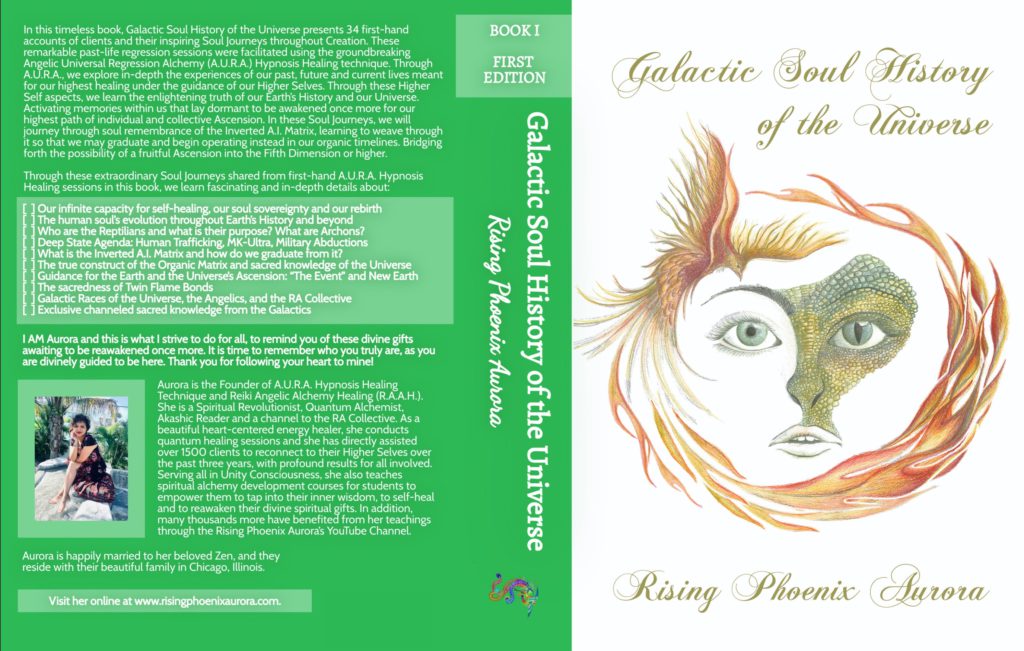 To purchase Aurora’s Book, “Galactic Soul History of The Universe” on paperback or in ebook click here, if you are located in the states. If…

Please confirm you want to block this member.

You will no longer be able to:

Please note: This action will also remove this member from your connections and send a report to the site admin. Please allow a few minutes for this process to complete.

You have already reported this